It’s only fitting.. as in a way Phil is responsible for me developing the ISS-Above.  You see – three years ago he posted a link to a project he heard about called ISS-Lamp (which actually became a Kickstarter called ISS-Notify).

You will even see on that page a comment I MADE about the article.

I followed that link in June 2011 and became a backer of THAT project.   Three years later – and no sign of that device – so I decided to build my own version (of very different design and capabilities).

I remembered Phils interest in that project – and his comment about his (lack of) soldering skills (something we share in common).

So I sent Phil his ISS-Above earlier in the month – and he must have turned it on today.. as it has just started to send Tweets when the ISS passes by Boulder, CO. 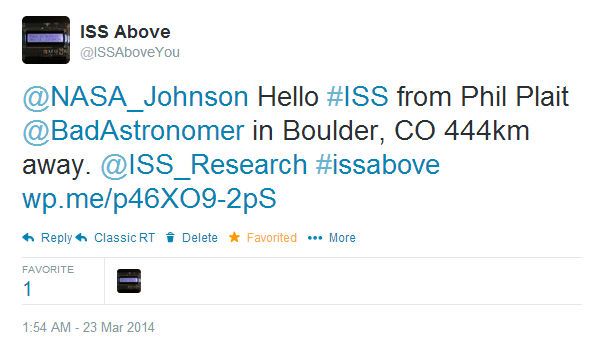 How flipping nerdawesome is that?