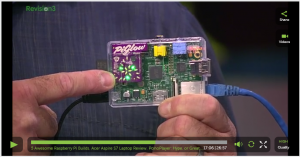 I met Patrick Norman briefly at the studios of TWiT.tv in Petaluma, CA last week when I was being interviewed on a special feature show all about the ISS-Above.  Shannon Morse was the co-host for THAT show on TWiT and was so inspired by the project that she wanted to feature it on Tekzilla as one of these 5 Awesome Raspberry Pi tricks.

The ISS-Above is featured 2min 33sec in to the show.

I particular loved Shannon’s passion and interest in the whole ISS-Above project and I love how she showed almost all of the features including the web site app I built on the Pi.

More information in the FULL EPISODE